April 10, 2008
Spring Fling 2008 was better than anyone could have imagined - the knowledge and generosity of my fellow garden bloggers overwhelmed me to the point of silence. Anyone who knows me is impressed by that! It has been captured so well on other sites, I've decided to leave it at that. Sometimes something is so good, my feeble attempts to describe it only diminish it. Check out Pam's "Digging'" for info, pictures, and links. It was perfect. Enough said. 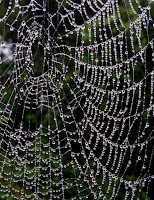 It surprises me how many people are tracking the progress of my rain harvesting tank installation. Just for them - here's the big unveiling! The morning after Spring Fling, we went to the local big box and got the PVC piping and fittings to connect the tank.

If you're not used to doing a lot of projects with PVC, I encourage you to gently connect all the pieces while you're there at the store to test for fit. They always have short sections of piping for sale. Assemble joints and use one of those short sections to test everywhere you think straight lengths of pipe will be. Four inch and three inch inside diameters begin to look a lot alike when faced with a wall of white plastic. We went armed with the downspout adapter installed by our guttering company. In the picture below, it's the rectangular piece with a round outlet at the bottom of the spout. It's screwed on, not riveted, so it can be removed to go on your walkabout with you. 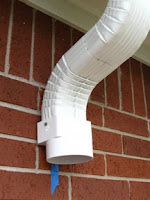 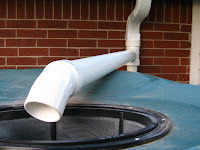 In this shot, you can see the top of the tank. There is a lid that screws on over the drop-in basket, but we chose to leave it open for now. The removable strainer basket catches leaves and anything that makes it past the "first flush". Many people just cut a hole the size of the pipe and let the water flow directly into the tank. As the water in this type of installation is only for landscape purposes, that works fine. We just didn't want to cut a hole until we were certain we had everything the way we want it. I'm making a little wooden "roof" (that looks a lot like a birdhouse) to sit over the opening to deflect leaves and protect the basket from falling twigs. So, what's a "first flush"? It's the stretch of pipe that has to fill up before water backs up and begins to flow into your tank. The picture above shows ours, which will hold about 8 gallons before water flows off to the tank (through that pipe to the left at the very top of the picture). Gravel, bird droppings, and other junk is washed down by the initial rainfall, and settles in the pipe. It's also possible to install a valve with a float in this section - it seals off the opening when the first flush pipe is full. But in landscape applications, it's not really necessary. Just remember if you live in a city that gives rebates on rainwater harvesting systems (like Austin), you are required to include a first flush. At the very end of the pipe, there's a screw on cap you remove to release the first flush water into the garden. Lots of people loosely attach that cap so it drips a little all the time and doesn't really have to be opened completely. Just be sure it's snug enough to contain the water during a rain.
Now, how to get the water OUT of the tank. The piece shown below is screwed into the opening at the bottom of the tank to adapt the opening size to the opening of the valve: 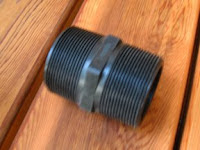 A heavy duty valve like the one shown is necessary to hold up to the pressure of all that water. It goes on next: 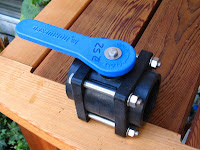 The next fitting, an adapter, will size the opening down to your pump hose or a regular garden hose. We'll soon be installing a Grundfos pump that has a 1" pipe connection; but for now, we're putting in a 5/8" adapter to connect a hose faucet. 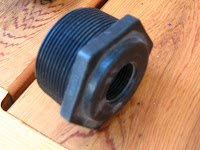 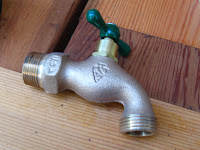 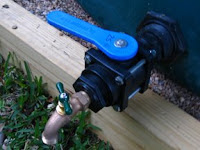 I actually have the hose faucet outlet pointed sideways now so I don't bang my knuckles on it when turning the handle on the big valve. This picture was taken when it still pointed down ( before I banged my knuckles.)

I didn't tell you before, but the deciding factor in chosing a guttering company was this little design element shown above. We have one of those crazy rooflines - little sections interrupted by windows and several different levels. Our salesman had enough experience in rainwater harvesting, he was able to suggest things like this to capture that little extra bit of rain. The installers crafted this out of a section of downspout. It catches a valley in the roofline that otherwise just would have been wasted. Listen for things like this that prove they understand what you want and are not just delivering their canned sales pitch. Luckily, all three of my salesmen were well informed. It was a hard choice.

Yesterday we got our test rain - a downpour of about 1/2 inch in a short period. All the parts stayed stuck together, even though we didn't use any adhesives. I was like a kid seeing snow for the first time - out there listening to the drops ping down into the big tank. My husband wanted to turn on the tap, but I didn't want to waste a drop. Now, if I can just get a good night's rest. I kept dreaming of all the little lizards who might be trapped by a sudden storm. Nature lovers! We're a mess, aren't we? Anonymous said…
I'm one of those who are eagerly following the installation of your cistern, so thanks for the update. Let us know when you use the water for the first time.
April 13, 2008 at 6:08 AM

Diana said…
Oh how cool! And thanks for the specifics and details. This really is a huge undertaking and we are all fascinated by it. My husband would love to do this somehow -- so watching you unveil your baby is a big help. Loved getting to know you at the Spring Fling - we'll have to get together sometime.
April 13, 2008 at 3:09 PM

Annie in Austin said…
The idea is sure timely and you explained the connections very clearly VDBD. I can imagine how excited you'll be when we get a real toad-strangler. [Oops, didn't mean to upset the nature lovers with that old weather term!]

Unknown said…
Awesome-thanks for the final chapter on the installation. Now I can't wait to see the results. My own two small barrels seem so teenincy right now. Anyway, congrats on getting all of it together and can't wait to see more.
April 16, 2008 at 7:29 PM

Aiyana said…
How much rain do you get in a year? How much will your collection system hold? This looks like a worthwhile project!
Aiyana
April 18, 2008 at 11:46 PM

Popular posts from this blog

A Plant with Purple Leaves

January 21, 2019
There are a couple of groups on Facebook where I lurk and occasionally dip my opinion into the fray.  They're places where people with knowledge of unbelievable scope can be observed, deftly identifying this obscure native plant or that scraggly left-behind orphan found in the backyard of a newly purchased home.   One such backyard orphan recently was posted in need of identification.   If it were a native plant, two people on "Texas Flora" would've named it within minutes.  Even the taxonomy of those impossible grasses is typically put to rest in seconds.  Not so with this poor guy.   At first I was fairly certain it was one of the purple leafed basils, maybe 'African Blue'.  It's fairly impossible to find it still thriving in a Texas January, but two plants in my yard are still hanging in there.  They even look like they'll come back if we don't have a deep freeze before spring.  BTW, this basil has one heck of a botanical monik
1 comment
Read more

December 08, 2020
There HAVE actually been some good things happen in 2020.   One for me was being fortunate to join a small group working to certify Austin as a Bee City through the Xerces Society.  As part of that effort, we've formed Pollinate Austin - PollinATX for short - and, of course, I wanted to share it with you. We intend to publish a newsletter with articles we're sure you'll find of interest.  We'll link to events and resources within our community as well as simply delight in our favorite "gateway bugs" (yes, they're not true bugs but well, you know.)  If you share our passion, you'll want to be part of the fun. Subscribe to the newsletter here:  https://forms.gle/VcYiKxqmi618PjBSA And follow us on Facebook here:  https://www.facebook.com/PollinATX     Looking forward to seeing you!
Post a Comment
Read more

Seasons are Changing on Subscribing

August 06, 2021
You are clearly a discerning group.  There are less than 100 of you and I'm deeply grateful for each and every one.  However, I'm about to lose all of you.   Blogger's "easy to follow instructions" to export my subscribers to a CSV don't seem to apply to me, even though I actually do know what a CSV listing is. After searching every single aspect of my blog, every bit of minutiae behind the curtain,  I found a list of "followers".  But there was no "Analyze", no "Email Subscriptions", nor "Manage Your Email Subscriber List" to open a new page to then export. So here's my request for a early fall/late summer activity.  Once Blogger gets its subscribe feature working again, or  I decide it's worth a move to WordPress, could I  possibly trouble you to follow me again some day? I'd be ever so grateful.  Otherwise, hope to see you at a Garden Bloggers Fling or even out gardening. See you again soon and thank you
Post a Comment
Read more

Who Is This Silly Person?

vbdb
My motto is "It's a short movie - share your popcorn." New goals are to start fewer sentences with "I", listen instead of talking, and to wag more and bark less.